A Little About Us

With the Ovaltine, there’s long-running history. It’s a piece of unchanged Vancouver, with a two-story neon sign that still shines brightly. The retro room could have gentrification vultures rubbing their hands. And then there’s its social value — this isn’t just a cool relic, it’s the real thing, a no-pretensions diner providing locals with low-cost meals..

The restaurant opened in 1942 and, in some ways, hasn’t changed much, from its neon sign to the classic diner interior.  In fact, the aesthetic is so striking that the cafe has been featured in a variety of film and TV productions, including the X-Files, Supernatural and I, Robot.

While the Ovaltine has been in business since the 1940s, it’s been owned by a mother-daughter duo, Grace and Rachel Chen, since 2014.  Grace has had a long time connection with the neighbour hood, starting off at the orginal Save on Meats.  After it was sold to Mark Brand an opportuny proesented itself for the Ovaltine and Grace jumped in.   For her, that connection with the neighbourhood continues to drive the business.  For the Chens, their main goal is to keep prices affordable for locals — to hiring local staff to help in the kitchen to the menu, which she said has grown based on suggestions. 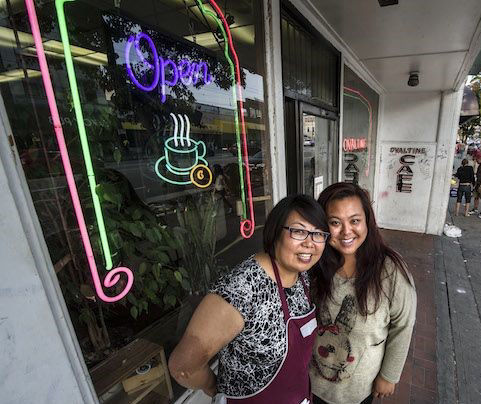